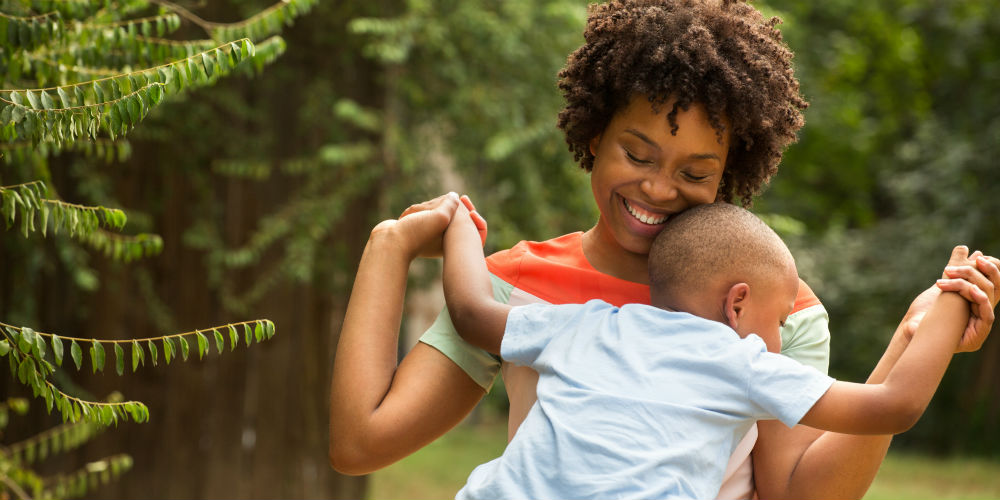 I was sitting alone at a small cafe when a bright-eyed, blonde-haired force of an 8-year-old boy sat at my table. We had not met before, but he talked as if he had known me all his life. As he frantically colored his coloring page, he spoke without ceasing about everything from hot wheels to Bakugan. A few minutes later, his dad came up and asked him in his worst Napoleon Dynamite voice, “You want some tots?” His little boy giggled and later told his dad in the car that he should ask out the girl he was sitting with because “she was a babe.” He finally did and the rest is history. Who knew that a single parenting father and his son would change my life?

Here we are, nine years later, and that bustling boy is my stepchild and the poor man with the terrible Napoleon Dynamite voice is my husband! When I met my husband, he was struggling to figure out the single dad life and striving to co-parent the best he could. My stepson is now 17 and has an amazing mom and dad. They have both had to figure out the dynamics of single parenting and also the dynamics of co-parenting without great examples to look toward. There have many ups and downs, but by placing the priority on him, both parents have done an amazing job putting aside their differences to put their son first.

The story is unfortunately too common. The struggling single mom or dad working three jobs to support their child because the other parent is M.I.A. The separated parents of a child constantly at each other’s throats due to disagreement and pride. Here are three things you must know about single parenting and co-parenting:

I know a single-mom very well who is the sole provider for her two children. Their father is in and out of the picture when he wants, but is unfortunately heavily involved in drugs and not able or willing to provide for his children. I also know a single dad who is in this exact situation with the mother of his children. The strength it takes them to provide for their children alone, and the amazing people their children are becoming, is inspiring. They seek to fill the void placed by the other parent and somehow adapt to doing all of this alone. Single parenting is not for the faint of heart, but is very possible and rewarding.

It is very likely that a single parent or separated parent may have some sort of resentment toward their ex. It is uncommon that a separation occurred from a mutual and friendly place. It’s very easy to want revenge or want to make the other person pay. It is hard not to let pride get to us! When co-parenting, you have to put your pride aside daily for your child. Never use your child as a pawn. Your ex may even move on to a new relationship, making the pain even greater. Regardless of the pain, pride will only hurt your child and destroy a great opportunity to co-parent.

If you are a single parent with no outside support, your life is no longer your own. You will have to swallow your pride to not only say no to freedoms you once had, but also to ask for help when you need it. You have a whole new world of making decisions based on your child. Vocational, relational, and financial decisions, among others, should all come from a place of that will benefit your child.

When you put your child first you are able to make your decisions through the lens of what is best for them, not what feels the most satisfying for you. Even if the other parent does not quite get that aspect yet, your example will speak volumes. Rise above for your child. When you are able to set aside your differences, it is life giving for the child. They do not have to bear the burden of picking sides or feeling turmoil. If you are a single parent and the other parent is not involved, your whole life will revolve around placing your child first. Whether single or co-parenting, your child ultimately feeling loved, wanted, and secure in his or her relationships will be your ultimate mission.

My Other Posts
Lita Jordan is a master of all things "home." A work-from-home, stay-at-home, homeschooling mother of five. She has a BA in Youth Ministry from Spring Arbor University. She is married to the "other Michael Jordan" and lives on coffee and its unrealistic promises of productivity. Lita enjoys playing guitar and long trips to Target. Follow her on Facebook.
This website uses cookies to improve your experience. We'll assume you're ok with this, but you can opt-out if you wish. Cookie settingsACCEPT
Privacy & Cookies Policy

This website uses cookies to improve your experience while you navigate through the website. Out of these cookies, the cookies that are categorized as necessary are stored on your browser as they are essential for the working of basic functionalities of the website. We also use third-party cookies that help us analyze and understand how you use this website. These cookies will be stored in your browser only with your consent. You also have the option to opt-out of these cookies. But opting out of some of these cookies may have an effect on your browsing experience.
Necessary Always Enabled
Necessary cookies are absolutely essential for the website to function properly. This category only includes cookies that ensures basic functionalities and security features of the website. These cookies do not store any personal information.
Non-necessary
Any cookies that may not be particularly necessary for the website to function and is used specifically to collect user personal data via analytics, ads, other embedded contents are termed as non-necessary cookies. It is mandatory to procure user consent prior to running these cookies on your website.
SAVE & ACCEPT